Last week, I hinted towards my online daily journal but didn’t really share it. That’s all changed.

About midway through the week, two new essays formed as I was working on David’s Daily Journal (DDJ). I honestly wasn’t planning for either of them to happen, but I’m undoubtedly delighted, and I know that it’s directly related to working on the DDJ.

Now, it isn’t for everyone. In fact, I’m not even sure it’s really for you, but my own public digital garden.

It’s me taking all my random thoughts and throwing them at the wall for everyone to look at. There are obsessions and tangents and things that caught my interest, and I don’t expect any of you to look at all of it. Each entry is added on the spur of the moment, and as I discovered, some of my sentences don’t even quite make sense.

But I want to show my work.

So, this weekly newsletter will now become a wrap-up of the week’s DDJs, the 5 things that stuck out that might help you with your storytelling.

I hope you enjoy.

First off, be sure to know when to capitalize those styles of address.

I’ve been a fan of bookshop.org for a while now. It is “a socially conscious alternative to Amazon,” which of course I am going to like. Unfortunately, it is only in the USA and UK and not yet in Canada, but until then, I will have to live vicariously (we can do that for a book store, right?) by reading articles like this one from the Guardian.

A long time ago, when I was trying to do videos on my website, I had a whole series planned where I’d try various writing tools and record my results. It failed completely, but my first test was on Rory’s Story Cubes.

I like the idea of the dice, which you roll to get story prompts to build the stages of your story. I always thought they would’ve been great use in a classroom setting, or as a way to generate story ideas.

An example of what the dice lok like (and how to use them).

I never had a traditional Arts education, so I missed out on double entry journals and Point Evidence Explanations.

This is a fantastic tool to learn how to build stronger paragraphs from the writers I admire. The idea is to create two columns, one with the passage you’d like to study and the other where you write a list of observations.

I discovered this great technique through the newsletter of Nicole Zhu (aka Nicole Donut).

I’ve tried a broken version of this in the past, where I was doing them on separate document and not side-by-side. This way is miles ahead of what I tried. 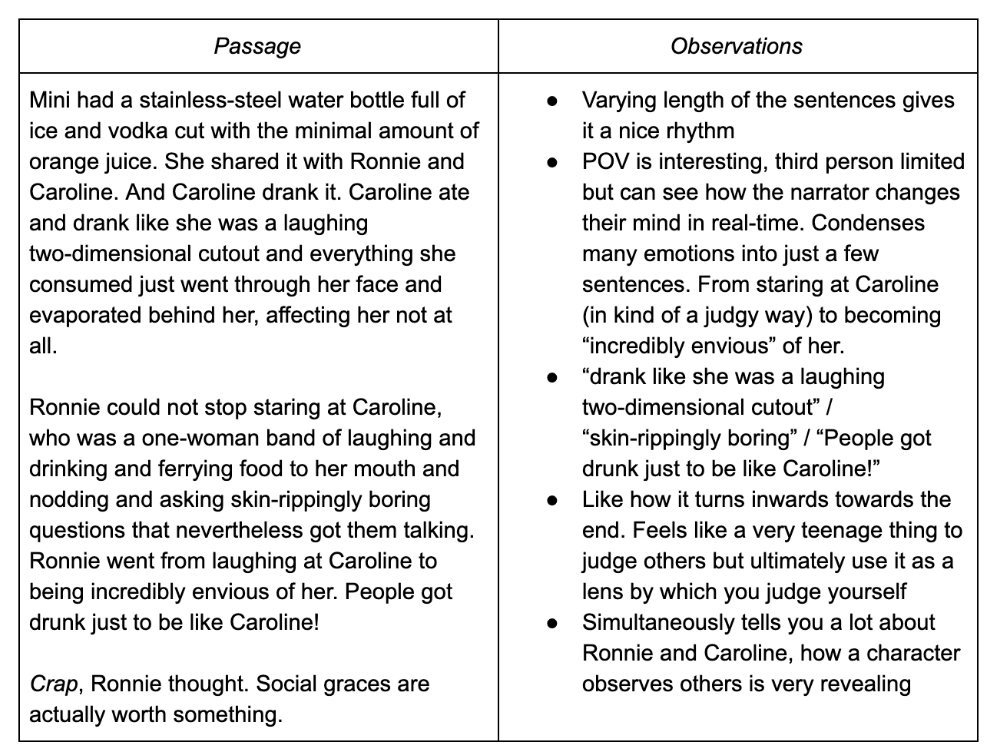 An example of double entry journalling via Nicole Donut.

And as I mentioned at the top, I wrote two short essays on creating strong recognitions and reveals in your writing. The first is coming at it from Aristotle’s Poetics and the second is building on it from Keith Johnstone’s Impro.

Up next Exploration of ideas David from the future: David’s Daily Marginalia (also called David’s Daily Journal) is now defunct. See the 20/ New Directions newsletter for more A Slip-box for Fiction When I’ve been playing with the DDJ, I’m thinking a lot about the idea of a slip-box, which is a note-taking system also known as zettelkasten,
Latest posts 23/ Stretched thin and moving forward The Rule of Threes, Conflict, and Starting Your Story 22/ Blogging is my Hobby More than One Want Old Posts Why is this particular character on this journey? Breaking the Website, Breaking the Book You’ll get through it 100 Attempts My March Challenge Becoming a Streamer Make your story (and marketing) rhyme What I want to do around here On Canoeing Reader Error The Continuum of Long Term Listen for the music Imposter Syndrome 21/ Tiny Notes Notes on “The Calculus of Grit” Tea Time Log Jams and the Creativity Faucet Thoughts on edits after the fact Low stakes New site, new changes Story Maps To Kate The Harold 20/ New Directions Stability 250 Words