This week, I’ve been trying to work through a reveal, where one character has to discover information that they weren’t even aware existed. The trouble with this problem was that I wanted it not to feel too coincidental, mostly since the character was utterly oblivious to the problem.

I worked on the problem with Ang, did a bunch of free-writing, researched for the solution, but wasn’t finding anything. Then I went back to Aristotle and the storytelling formula of WOARO to understand the problem better.

Aristotle writes in Chapter 16 of The Poetics that the least artistic form of recognition is signs. The hero recognizes some external token and is handed the solution. The second is being told, which Aristotle basically says had been willed by the poet. The third is a memory, often signalled by an external token leading to recalling an old detail. The fourth is through a process of reasoning that involves false inference: one character says something that a character misunderstands but leads them down a line of reasoning. And the fifth—and most dramatic of reveals—arises from the incidents themselves, “where the startling discovery is made by natural means,” which, for Aristotle, comes through a process of reasoning.

The exciting thing is how it relates to the shift between action and stimulus.

In the WOARO formula of story, characters want something, something stands in their way, and they must take actions around the obstacle to get what they want. Yet, this isn’t always the case. Sometimes things happen to characters, which is called stimulus (external or internal) because it forces the character to respond and take action.

For Aristotle, the least artistic form of recognition is when things happen to the character, whereas the best form is when the characters are taking action.

Recognition and the line of stimulus to action

When a character is actively seeking the recognition and reveal, we feel they are taking action into their own hands. Things aren’t just happening to them. They aren’t passively waiting for someone to hand over the information, either intentionally or by accident.

They are active in the story, making their eventual understanding more fulfilling.

Once I recognized this (see what I did there), it made my path much clearer: I needed to move my character out of the stimulus/response side and over to the action side.

Instead of over-complicating the process, I needed to strip the problem down to the level of the story equation: What does the character want? What stands in their way? And what action do they take to get it?

Initially, the character was waiting for the other characters to answer. Still, in reality, they needed to pursue it by asking questions that lead to new information, which could then be built upon further.

This shifted the focus is to finding the cleanest and most straightforward path to move them towards that understanding.

(And as a side note, I’ve also realized I can use instances of stimulus/response to work against the character—complicating the journey instead of helping it along.)

What are your favourite reveals or recognitions? Why did they work? Was there anything that didn’t work for you?

Up next If you think it’s ugly now… If you look through design history and you see something that looks really radical, that’s what you’re going to be doing now. If you think that’s 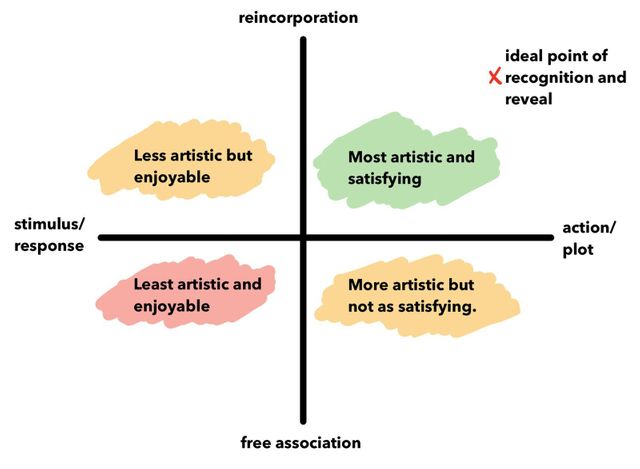 Creating a Satisfying and Artistic Reveal
Latest posts 23/ Stretched thin and moving forward The Rule of Threes, Conflict, and Starting Your Story 22/ Blogging is my Hobby More than One Want Old Posts Why is this particular character on this journey? Breaking the Website, Breaking the Book You’ll get through it 100 Attempts My March Challenge Becoming a Streamer Make your story (and marketing) rhyme What I want to do around here On Canoeing Reader Error The Continuum of Long Term Listen for the music Imposter Syndrome 21/ Tiny Notes Notes on “The Calculus of Grit” Tea Time Log Jams and the Creativity Faucet Thoughts on edits after the fact Low stakes New site, new changes Story Maps To Kate The Harold 20/ New Directions Stability 250 Words