This story is a part of a writing experiment I did from May 24 to June 24, 2021. The goal was to write a new story every day. Although I'm happy with them, they are first drafts and many could use some work.

Ben slammed on the brakes, the tires grating across the gravel.

He stared at the almond coloured bird that stood in the middle of the road, its neck hunched low, its wings swept out to its sides.

“What the hell is he doing?” he grumbled.

His daughter, Sydney, shifted in her seat, no longer staring out the window away from him and watched.

“There are two others on the other side of the road,” she said quietly. It was the first thing she had said since they had left the cabin.

Ben looked over and saw them. One was much smaller and fuzzier.

Ben turned the wheel and rolled the car forward, and the bird raced in front of them, flapping its wings and letting out a guttural honk.

“I think it’s a whooping crane,” he decided.

The bird landed ahead of them, and ahead into the opposite field.

“I’m not going to bother your family, you stupid bird.” he said, but the bird ran beside them, staying parallel with the car. Ben pressed the gas and sped away.

Sydney watched out the back window as they disappeared into the dust.

“That was quite the sight,” Ben said, but Sydney didn’t respond.

He drove a little while longer before he cleared his throat. “I don’t suppose—“

“Because you said plenty.”

“I just want to explain myself.”

“But why? Why won’t you let me explain?”

“Because this isn’t about you!”

Ben fell silent and drove the car. Then he didn’t. “What if—?”

“Please, can I just ask a question?”

“Not if you’re going to say something that hurts me.”

Ben’s face scrunched together, running it in his head. He proceeded. “What if someone hurts you?”

She glared at him.

“I—“ He stopped himself. “There are people out there—“

“What if they hurt you?”

“No buts. You asking me not to be me is what is hurting me now.”

His mouth opened and closed, but he said nothing.

“If you really love me, you’ll support me, no matter what.”

He didn’t speak after that, his eyebrows pinched together as he watched the road as he drove.

She waited for him to respond, and when he said nothing, she turned back and stared out the side window.

They reached the end of the gravel and pulled to a stop. The signal ticked away as he craned his head, looking for oncoming cars. She turned and looked at him, and his uncomfortableness grew.

She shook her head and looked back out the side window.

He pulled onto the highway and the tires hummed as the car picked up speed.

Sydney glanced over. “What?”

He nodded. “No matter what.”

She nodded and turned on the radio. A pop song played that he knew the lyrics to, so he tried a few bars, glancing at her for approval. She smiled, rolled down her window and stuck her arm out to ride the air currents. He did the same, and she started to sing along with him.

They sailed down the road, whooping the lyrics, flapping their arms, and cars approached, they couldn’t help but think that Ben and Sydney looked like some awkward, majestic bird flying towards them.

Purchase a membership to read more. 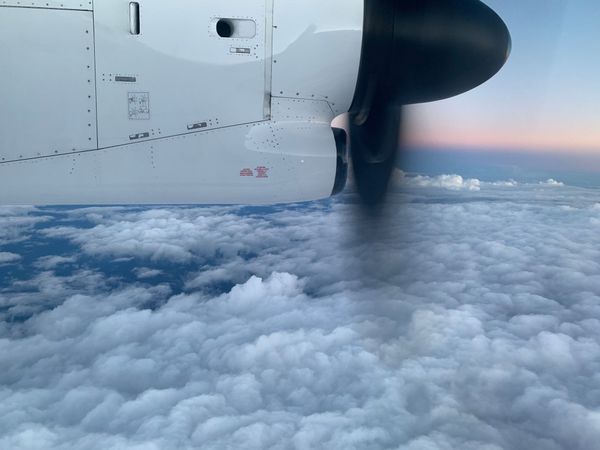 This story is a part of a writing experiment I did from May 24 to June 24, 2021. The goal was to write a new story every day. Although I'm happy with them, they are first drafts and many could use some work. The trees in front of Ben’s

At the end of a city, four people watch it burn.